As can be imagined, the history of U.S. military advisors in southeast Asia created many strong relationships that continue to this day. An association of military and civilian advisors along with their foreign counterparts exists to promote an appreciation of the advisory experience and accomplishments to the general public. Counterparts operates a nationwide locator service to assist former advisors, their counterparts, and families to locate one another and find their former comrades. 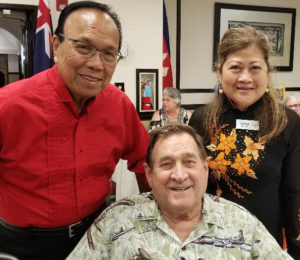 Dr. Bob Worthington was honored to be a part of the recent Counterparts Reunion which took place this past April in Houston, Texas.  With his well-documented experiences as a former U.S. military advisor, Dr. Worthington was excited to see old friends and meet new people with connections to southeast Asia.

In this photo, Dr. Worthington was pleased to meet Henry and Tania Newinn, sponsors of the event. The Newinns escaped Vietnam in 1975 as the North overran the South. At the time, Mr. Newinn was an ARVN special forces soldier and Mrs. Newinn was a 21-year old mother of a one-year old baby. After they fled their home country, they came to the United States and settled in Houston. 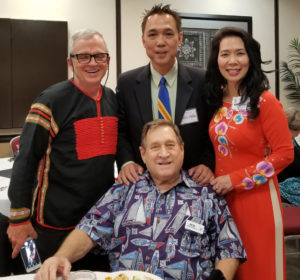 The Saturday evening banquet at the Counterparts Reunion allowed Dr. Worthington to meet some more very special people. Standing behind him in this photograph is Tom Tran, a former ARVN soldier that was only 18 years old when he escaped Vietnam with his brother in 1975. Mr. Tran also settled in Houston and graduated from Rice University. Today, he is a senior executive and an exploration petroleum engineer with a major oil and gas company in Houston. Mrs. Tran stands next to her husband. Dr. James Wells stands on the right, a full professor of Criminal Justice at Eastern Kentucky University. Mr. Wells’ father was initially an advisor for the U.S. Army and later returned as a State Department advisor. Ultimately, Mr. Wells’ father died when the CIA plane he was in was shot down after taking off from the Bao Trai air strip near the Cambodian border. Dr. Worthington hopes to include the story in his next book.

More information about Counterparts and their mission can be found on their website at http://www.counterparts.net/